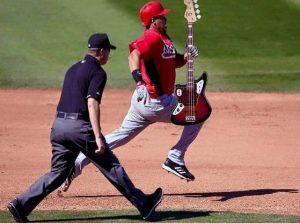 You Can’t Be Naive in the Music Business, They’ll Eat You Alive!
So as a music producer, studio owner or engineer, pay attention.

If it hasn’t happened yet, sooner or later a friend of a friend of an acquaintance of your cousin will need to use your recording studio and offer to pay. Sounds good, right? But despite good references, not everyone is a good client. So how do you avoid being ripped off?

There are many methods that people will employ to avoid paying you. A message left for me last Sunday by Tom, a new assistant engineer in my studio, illustrates some of the common ploys you will encounter: “Wow, I can’t believe it.” Tom said. “They did everything you said to watch out for. First, they came more than an hour late, at 8:20 p.m., and said that’s the time they booked it for, not 7:00. Then they said their friend was coming with the money, but when I told them it was agreed upon beforehand that it was cash up front and that the session wouldn’t start without it, they coughed up the dough. Then their so-called ‘engineer’ didn’t know what he was doing and thought the solo button would generate guitar solos, so I ended up engineering the session.

They tried to claim it was downtime while their engineer was trying to figure out how to use a trackball. They didn’t want to pay for the time spent eating, and wanted to come by the studio tomorrow to replace the tapes and they used, instead of being charged for them. They went a few hours over, and paid at 1:30 a.m. for time up until 2:00. Then we worked until 3 a.m. making CDs, and they tried to leave without paying the additional money. But I remembered what you said. If a client who’s not with a well-established company leaves owing you money, you may never see them again. If you insist and get the money they’ll always feel in the clear to come back to you, so you don’t lose the client. So we waited while one of them ran to the ATM. Believe it or not, they said they’d call you Monday for more time.“

Well, we got through that one unscathed because we’ve seen it enough times to know what pitfalls to expect. Other times we haven’t been so lucky.

Following are a few interesting stories that will give you an idea of the kinds of scams that go on. These examples might help you avoid unpleasantness in your own home studio.

THE CASE OF THE MISSING C-l2 Microphone

A friend of mine was engineering a session at a major studio. The session was booked four hours of vocal overdubs, and the clients — a producer and one singer agreed to pay cash up front for the four hours plus the rental of a $7,000 AKG C 12 microphone. In the middle of the vocal takes, the producer and the singer got into a heated argument. The producer asked the engineer and assistant to step into the lounge while he fought it out with the singer. After yelling and ranting (unseen by the engineers) the singer stormed out of the vocal booth with his jacket and said, “I’m outta here.” The producer freaked out and screamed at him all the way down the hall and into the elevator. After 15 minutes and no sign of either of them, the assistant noticed that the C 12 microphone was missing. Dah!

WHO NEEDS THOSE TAPES, ANYWAY?

A very successful producer, now deceased, used to be famous for this scam. It could have been named after him.

The producer would go into a major studio and book five days. He would say that the record company was going to pick up the tab, but to show his good faith, he would pay cash up front for the first two days. This always makes a studio manager feel at ease. The producer would use all of the facility’s 2″ tapes (which provide a nice profit margin for a studio). When Friday rolled around and the record company refused to pay, the producer would offer to leave all the master tapes there and settle the bill himself on Monday. He would only take cassette versions of the songs. Now the average studio owner would say, “Fine; he’s a nice guy, he paid some money up front, and he’s not going to leave a week’ s worth of work behind.”

Wrong! The music producer would take the songs to publishing companies and push them. If they loved a song and wanted to use it for one of their artists, he would rerecord it at another studio with the record company paying, or use record company money to retrieve the masters from the original studio. If nobody wanted any of the songs, why bother paying the studio to get the tapes? The producer repeated this scam around the city until finally enough people became wise to it. New York is big, and there are a lot of studios, so he had a nice run before he was cut off.

THE CASE OF THE RAP IMPERSONATOR

Here’s a good one. Years ago, a major studio was approached by an artist claiming to be a member of a successful rap group and now doing a solo record. He said he was signed to a major label through the label’s California division, and they were talking about booking an entire week to start and extending it to a month if all went well. A purchase order number (PO#) was faxed to the studio on record company stationery, and everything looked legit. I was hired and I enjoyed the sessions because they brought a caterer down to the studio every night; she set up hot plates, soup, and salads, and served some great food. We would break every night for a nice, leisurely dinner. They even sent a plate of food for the night manager. Everyone loved this crew. The music was good, and they knew what they were doing.

Toward the end of the week, the 2″ tapes mysteriously vanished from the session, along with the artist and his crew. The caterer came to the studio with a bill, asking to be paid. When the smoke cleared, it was apparent that the artist wasn’t who he claimed to be, the record company knew nothing about it, the PO# was phony, and they ripped off the nice caterer as well. A costly tale.

Be wary if you’re receiving personal checks for your work from people you don’t know. A standard policy is to hold the tapes, CDs, etc. until the check actually clears.

Unfortunately this can’t always be done. But you can check to see it the funds are available by calling the bank branch listed on the check and giving them the account number and the amount of the check. If the funds are not available, don’t take the check. If the funds are available, you’re still taking a chance, because by the time the check is deposited and your bank talks to their bank. They may have withdrawn the money or stopped the check. I recently did a session where the guy said he was paying cash but ended up giving me a company check at the end of the session. I’d done some business with the company before, so I figured it was safe and released the CDs. The next day, while depositing the check, the teller noticed that the check wasn’t signed.

Now we had to scramble and make numerous phone calls, and fax over copies of the bill and work order and other nonsense before we actually chased down a good check two weeks later. That one slipped by me once, but it won’t again.

Another scam I’ve seen recently is people bring their laptops with digital audio interfaces to the studio. They record a stereo mix to 2″ analog tape, do all their vocals and live tracks, and then record them into the computer for editing The collateral that studios have always had are the actual tapes themselves — you don’t pay the bill, you don’t get your tapes. In this situation, these people don’t care. They’ve recorded all their tracks back into their laptop, so they don’t need the 2″ tape anyway. I even got a guy in my studio once who was a working producer and agreed to pay the cash up front. When he arrived without the cash, he agreed not to take any tapes whatsoever — not even a cassette — until the next day, when he would come by to straighten it out. It turned out that he was just auditioning some artists and had no intention of keeping anything he recorded anyway. Needless to say, I never heard from him again.

Unfortunately, we do not live in an entirely honest society while some of us may have copied a CD from a friend, or have some software in our computer that we haven’t purchased, we still consider ourselves basically honest. We would never consider doing the things that some dishonest people thrive on. But after getting burned too many times, you learn a few things about seams and how to avoid them.

I have policies in place at my studio now from which I try never to stray. We state them clearly before any time is booked so there are no misunderstandings later. I have them listed on my web site , and when necessary, I’ll fax them over to the client as well. In a home studio you don’t need to be as stringent, but you do need to be cautious.

I trust these tales of woe have made you aware of many ways people can take advantage of you and your studio. Don’t be to cynical, though, for the deeds of the ill-intentioned are easily foiled by the ways of the wise.

Arty Skye is a multi-platinum, Grammy nominated producer/engineer as well as the founder of SkyeLab Music Group. He has worked with thousands of musicians and renowned artists such as Will Smith, Madonna, Santana, Alicia Keys, Wu-Tang, Kelly Price, and more.